The United States Can Offer the People of Lebanon and Iraq Something Tehran Can’t Protesters in Iraq and Lebanon are rising up against Iranian influence, sectarianism, and corruption. The U.S. Congress should offer conditional aid that forces governments to respond to their citizens’ grievances. 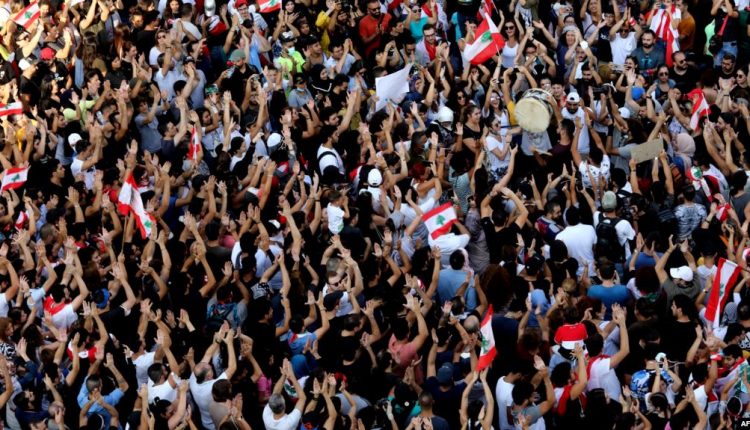 The United States Can Offer the People of Lebanon and Iraq Something Tehran Can’t
Protesters in Iraq and Lebanon are rising up against Iranian influence, sectarianism, and corruption. The U.S. Congress should offer conditional aid that forces governments to respond to their citizens’ grievances.

rotests and upheaval are sweeping Iraq and Lebanon. The wrath of demonstrators in the streets is being directed against their own political classes and at Iran’s government. Citizens in Lebanon and Iraq are not only fed up with economic mismanagement, ineffective governance, and entrenched corruption of political elites at home, but they also directly link their dismal situation to Tehran’s corrupting influence and the Islamic Revolutionary Guard Corps’s exploitation of their countries to fund and arm militias unaccountable to their countries.
Taken together with the extensive riots in Iran, U.S. President Donald Trump sees these developments as proof that his administration’s so-called maximum pressure policy of squeezing the Iranian economy is working. Not surprisingly, the administration is now determined to double down on its sanctions policy, convinced this will force Tehran to capitulate and seek negotiations with a new willingness to concede on the regime’s nuclear program and regional behavior.

The administration’s critics doubt this policy will work—believing that it will simply back the Iranian government into a corner, prompting it to escalate conflict in the region rather than surrender.
Lamentably, neither the administration nor its critics have put cogent proposals on the table for how to respond to developments in Iraq and Lebanon. For the administration, offering rhetorical support to the Iraqi and Lebanese publics and calling on their security services to stop their abuses reflect the limits of what it believes can be done. Its critics may be even more passive, fearing increased U.S. engagement will detract from the anti-Iran focus or, even worse, exacerbate the situation in either country given the Trump administration’s record of clumsy policy execution.
The irony is that neither the administration nor its critics appear to believe that meaningful, sustainable change in Iraq and Lebanon is possible—even though this is exactly what the protesters are demanding. The resignations of the Iraqi and Lebanese prime ministers—Adil Abdul-Mahdi and Saad Hariri

more focused on horse-trading posts in the next governments rather than offering bold political and economic reform proposals in response to the protests.
The next iteration of governments in Beirut and Baghdad are likely to preserve the system of elite capture that sustains itself by brokering power along sectarian lines. Protesters in both countries recognize their leaders’ narrow focus on self-preservation; they are not appeased and appear motivated to keep coming out to the streets in objection.
The hesitancy and skepticism of the Trump administration and its critics alike no doubt result from the United States’ own dismal experiences in trying to incentivize change in the Middle East. While both Republican and Democratic administrations have fallen short in encouraging systemic reform in the Middle East, Iran by contrast appeared to be on a roll in recent years. Tehran took advantage of U.S. missteps and power vacuums in the region to extend influence and coercive means far beyond Iran’s borders.
Now, Ali Khamenei, Iran’s supreme leader, refers to Syria and Lebanon as Iran’s “forward defense.” Iran executed its strategy using both hard and soft power, moving precision-guided weapons into areas where governments do not maintain a monopoly on the use of force in both Syria and Iraq; training and deploying Shiite militias in Syria, Iraq, Lebanon, and Yemen at minimal cost to Tehran; and complementing these military tools with soft-power inducements tailored to local contexts such as sectarian manipulation, real estate purchases, tribal payoffs, commercial contracts, and provision of services—all designed to prey on weak governments, vulnerable leaders, and needy populations.

The net result: Iran seemingly gained strangleholds over leaders and governments in Iraq, Syria, and Lebanon, and it realized its goal of dictating policies and embedding proxies (Hezbollah, the Badr Organization, Asaib Ahl al-Haq) within government institutions for long-term influence. Taking stock of this strategic picture, U.S. policymakers spoke boldly in public about the need for Iran to pull back but never proposed an effective and properly funded strategy to achieve that objective.
But the recent, widespread backlash against corrupt, weak governments and abusive security forces unaccountable to Lebanese and Iraqi citizens suggests that the Iranian gains may not be so enduring and may even have produced a contagion effect in Iran itself.
Certainly, the Iranian regime’s draconian response to the unrest in at least 20 cities—a response that led to the deaths of more than 300 people and arrests of more than 7,000—suggests that the regime feels vulnerable and pressured to preempt the spread of the protests. If so, the United States should not assume that Iran’s regional position is so strong and entrenched that there is little Washington can do to push back.

The fact that significant Shiite constituencies in both Iraq and Lebanon are very much a part of demonstrations against sectarian rule and Iran’s heavy hand speaks volumes about Iran’s vulnerabilities and the difficulty of sustaining its regional position.
Moreover, Iran’s soft-power strategy—leveraging Shiite sectarian ties in Arab-majority areas to gain influence via cultural, religious, media, and economic projects—seems to

associated with corruption, unaccountable leaders, unrepresentative governance, economic mismanagement, abusive security forces, and violent responses to protesters. Iran has overreached and overextended, and Iran’s leaders have not offered Lebanese or Iraqi citizens anything meaningful—and their own brutal domestic crackdown on Iranian protesters further diminishes their appeal.
Iran has few tools or resources at its disposal at the moment—especially with its economy being squeezed and mismanaged—so the United States should be able to compete more effectively.
Certainly, it is time to go beyond the Trump administration’s preferred foreign-policy tool of using sanctions to address every malign Iranian activity—whether it be illicit nuclear activities, support for terrorism, or human rights abuses. At the same time, sanctions are not the most effective tool available to U.S. policymakers in response to protests calling for an end to corruption, broken economies, and unaccountable leaders.
U.S. policy should now focus on distinguishing what Washington can offer the region and differentiating the U.S. brand from Iran’s bankrupt and violence-riddled vision.
If the administration is unwilling or unable to galvanize domestic bipartisan support for such a policy shift, it is time for Congress to step up to the plate. Surely members on both sides of the aisle remain committed to a stable region, pushing back on Iran, and supporting meaningful political, economic, and security sector reform.
One option is to offer strategic partnerships with the Lebanese and Iraqi people through legislative action: an updated U.S.-Iraqi partnership that deepens commitments already made in the 2008 Strategic Framework Agreement and a new U.S.-Lebanon compact that sets forth a road map for bilateral engagement beyond Washington’s stale focus on the Lebanese Armed Forces. Congressional action is necessary because it cements a time horizon not tied to presidential election timelines and sends a credible signal to a region wary of the sharp swings and mixed messages of U.S. administrations.

The offer by Congress to build these partnerships should be conditioned on leaders and governments in both Iraq and Lebanon going beyond rhetorical support and pledges to taking concrete actions that meaningfully respond to the demands of the protesters. What Congress can offer is not simply funding or verbal support but a framework for partnership that responds to the calls of the protesters. Legislation should include public reporting requirements on benchmarks for reform as well as an assessment of their actual implementation. Funding and assistance should be on the table, especially for supporting reform in civilian ministries.
The good news is that the United States actually has the technical expertise and international relationships, especially working with allies and credible nongovernmental organizations, to assist in tackling corruption, fostering the rule of law, restoring services, offering training, developing infrastructure, and stimulating economic growth. Collectively, U.S. partnership offers the possibility of meaningful scientific, educational, commercial, and technological exchanges. This is what protesters want, and this is what Washington can meaningfully offer.
Iran offers none of these things.
The United States now has a window of opportunity to present what Iran cannot: a sense of possibility to Iraqi and Lebanese publics hungry for real change, who are unlikely to rest until they have it